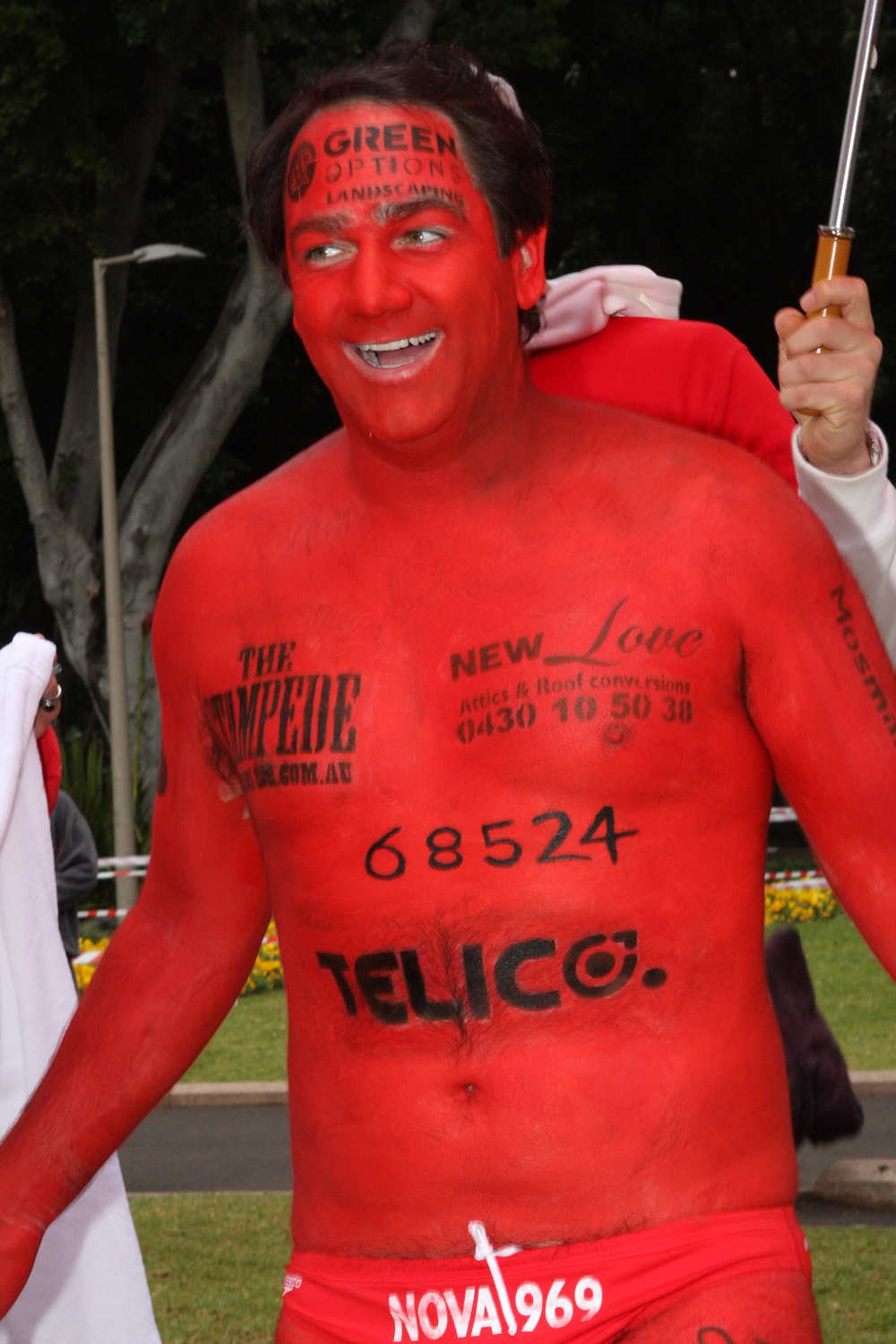 It started off wet and windy, but about half an hour into the race weather conditions generally improved.

The race was as competitive as ever, but for one major sponsor, Nova 96.9FM, exposure and publicity was of paramount importance – not that finishing strongly wasn’t also on the agenda.

Nova personality Wippa and a few of his mates got body-painted up courtesy of leading Australian bodypainting Human Statue Bodyart.

Wippa was made up with red and black bodypaint and it was impossible to miss the logos from supporters and sponsors including those from Nova, Dick Smith, The Stampede and New Love.

Liam Adams has become the first back-to-back winner of the City2Surf run since Dickson Marwa in 2006-07, besting his rivals to take out the 14-kilometre race in 00.41.31 minutes.

With his biggest challenger, Michael Shelley, competing in the Olympic marathon in London, it was all there for Adams to capitalise.

After grasping the lead early from the 8am start, Adams didn’t seem fazed by the wet weather and strong winds, snatching a 40-second lead at the 5-kilometre mark and having the race convincingly won by the climax of Heartbreak Hill.

With fellow pre-race favourite Mitch Brown on his tail, Adams also left eventual runner-up Harry Summers in a race for second as he entered the back half of the race completely unchallenged.

He is the first Australian since Steve Moneghetti in the early 1990s to win back-to-back.

"I took the risk in going out and taking it too hard," Adams said.

"I actually blew up a bit so I thought I’d made the wrong choice and Harry is an even-matched runner with me. We’ve got close PBs [personal bests] and I thought he was going to run over me at the end.

"I thought I sightly broke him a little bit more up Heartbreak and a couple of those other hills and I just held on for dear life."

Some commentators thoughts that Sydney’s torrential rain and gail-force winds made it arguably the worst racing conditions in City2Surf history.

In 42 years, only twice had it rained during the world’s biggest run, but the capacity 85,000 entrants felt mother nature’s stormy power.

There was early relief when the race started in relatively dry conditions, but by the time Adams and his chasers entered the second half of the event they were met with fearsome head on winds.

"It was worse than last year – that wind coming into Bondi was tough," Adams said.

"I thought I’d be best at cutting the wind but that wasn’t quite the case. It was tough."

Of course, in the men’s field, a number of regular entrants were unavailable due to Olympic commitments, including 2011 runner-up Shelley who will race in London tonight. And in the women’s field, the race was wide open with defending Jess Trengove also in London. Instead, it was 2010 winner Lara Tamsett who was the favourite and snatched victory.

While none of the seeded or preferred runners came close to Steve Moneghetti’s 1991 race record of 00.40.03 minutes or Suzie Power’s 00.45.08 set in 2001, the race wasn’t without its challenges, with competitors hit by a wet and slippery road and strong head winds.